Well I think I have ignored my blog long enough.  I apologize for not showing my blog enough attention.  So where to start... it's been so long!
Last June 2013 I started promoting my song Truly to Smooth Jazz/ AC radio finally... it was way late but better late than never!
So far I've promoted as singles "Truly" and "There She Goes" and it has been fairly successful! They've been making way onto radio stations across the USA and Canada.  My song "Love's Eternal" was picked up by V103 in Chicago for their Steppers Show and that was a pretty big deal for me, considering Chicago is the #2 radio market in America and V103 is the #1 station in Chicago!
We are going to start promoting my next 2 singles "Keep Loving You" and "The Passage" in the next two weeks.  I hope you'll hear them on a radio station near you over the next 8 weeks!

This week I just got home from a week in Los Angeles for the Grammys.  It was a magical time and a few of my friends won! One of my best friends Laura Sullivan won for Best New Age album as well as my friends the Pacific Mambo Orchestra (Best Tropical album), Brent Fischer (Best Instrumental Composition) and Jennifer Gasoi (Best Children's Album).
I plan on being in their very select group soon!

I also busy making a new record for 2014! So I'll keep you posted as things get closer to release!

I'm still working as a percussionist with ConFunkShun and they too will be releasing a new record for the first time in many decades.  So be on the look out for that as well.

I'll up date you more soon!

I Blinked My Eyes and All of a Suddenly...

This year so far has been really productive for me and my music.  At the beginning of the year, I had my mind set to release a new album this year but then in March I, finally, released a music video for my song "Truly".
It's been pretty well received by those that have seen it.  If you haven't seen it yet, it is on YouTube at this link: http://www.youtube.com/watch?v=DFCQewq8MdM
Thanks in part to this video release, there has been new found interest in my Little Red Box album.  Available here http://theLittleRedBox.com
So as of right this minute, I have decided to delay a new album and continue to promote Little Red Box.  The good thing this is, I have been working on new music for about a year and a half. So it's pretty much ready to go!

"Truly" has also been getting spins and added to radio stations around the country and the internet.  In the past week, it's been added to these stations:

Smooth Jazz airplay:
• WFSS/Fayetteville, NC
• WJAB/Huntsville, AL
• WMWM/Salem, NC
• WMRT/Marietta, OH
• SmoothJazz.com/Global Radio
• GrooveSuite.com/
• TM Studios/Music sampler used for retail in store airplay, armed forces radio
• WITD at Live365.com/
• SmoothJazzAndMore.com/
• ChocolateJazz.com/
• CJazzChannel.com/
• GotRadio.com/Jazz So Smooth
I'm keeping my fingers crossed that it gains momentum and continues to be added on more and more radio stations.  Very shortly I will be shooting another video for my song "Keep Loving You" and hopefully will start doing more shows.  I'm getting the band geared up for the summer and I hope to see you on stage somewhere!

Thanks for your support!
D. Edward
Chungo Boogie Music
Posted by D. Edward at 3:48 PM No comments: 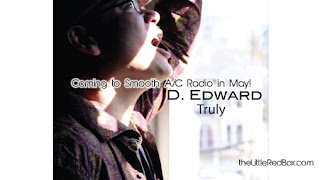